What Can a Chameleon’s Tail Do?

Chameleons are creatures with unique tails. The tail serves many purposes and helps the chameleons in many different ways.  Below are some things a chameleon can do with its tail:

Some Chameleons Can Regrow Their Tails

Like most other reptiles, chameleon tails are able to regrow their tail.

In the chameleon’s tail, there are genes that will activate when the tail is cut or removed. The gene will then start to grow the tail back to its original size and length.

The process will take about 60 days for their tail to regrow. Besides the color-changing, this is another special feature that the chameleon has.

However, there are some species of chameleon that are not able to regrow their tail. If it’s cut off, it will affect their balancing. This could make them easy prey for a predator such as snakes and hawks. Also, it will make it difficult for them to hunt for food.

In captivity, a chameleon that has its tail missing will not be affected much. They will just have a little difficulty moving around.

Chameleons Have a Prehensile Tail

Chameleons have a tail that’s prehensile. This means it’s able to curl and grab objects around them. The prehensile tail works similar to fingers and toes.

Chameleons are one of the few reptiles that have these types of tails. This reptile spends most of its life up in the tree, which the tail becomes very useful.

In their environment, the prehensile tail is very important to chameleons. The uses their tail for balancing on trees, clinging to branches when hunting, and securing themselves to an object when sleeping.

The tail of the chameleons is able to change colors, just like other parts of their bodies.

The changes of colors are helpful when it comes to hunting and hiding from predators.

They can change the color to match their surroundings. This will help them blend in and allow them to get close to their prey.

As for predators, when the chameleon sense danger is near, they will move closer to a plant or leaves and blend into the environment. Most predators will not be able to detect the chameleon and move along.

Why Do Chameleons Curl Their Tails?

Chameleons are arboreal animals, which means they spend most of their life up in the trees. This means they will need to be able to move around with great precision.

A chameleon’s prehensile tail is very useful as it is used to help them cling to branches and hold their balance.

As they are climbing the tree, they will use their tail to curl around branches to help steady themselves while they climb.

Also, chameleons will use their tail when they are hunting. When they get close to their prey, they will curl their tail around a branch. This will help secure them as they flick out their tongue to grab their grab.

When a chameleon curls its tail, this can be a sign of aggression.

For a male chameleon, when another chameleon comes into their territory, they will start to hiss, puff up their bodies, and curl their tail. This is a way to warn the other chameleon to back away, or they are willing to fight.

When it comes to the female chameleons, during pregnancy, they may curl their tails when a male chameleon comes near. It will usually be followed by hissing and rocking their bodies. This is a way to let the male chameleons know that they don’t want to mate or be disturbed.

Depending on the aggression level, some chameleons will even curl and uncurl their tail.

When a chameleon sleep, they will sleep with their tail curled. By doing so, the curled tail helps them keep their balance.

No matter what surface they are sleeping on, chameleons are great at keeping their balance without falling off.

If chameleons weren’t able to balance themselves, they will fall off the branch at night.

When chameleons sleep, they are vulnerable to predators. To prevent being noticed, they will curl their tail to make themselves appear smaller.

Chameleons will usually hide under large leaves, plants, and branches when they sleep.

When a chameleon is stressed, it will curl its tail. This is their way of letting you know that something is bothering them. 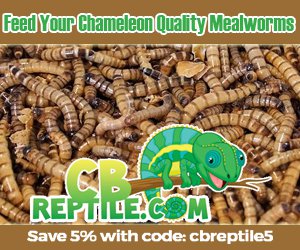 In addition to curling their tails, they will change the color of their skin as well.

Chameleons that are not stressed will usually have a straight tail.

Which Species Of Chameleon Cannot Curl Their Tail?

All species of chameleon have a prehensile tail, except for one species. The Brookesia chameleon is the one species not capable of curling its tail.

Brookesia chameleon is native to Madagascar and is the smallest chameleon in the world. They have a short and straight tail. The tail is not able to curl, only moving from side to side.

Chameleons have a very unique tail that most other creatures don’t have. They have a prehensile tail that allows them to curl it. They will use their tail for several different reasons. Without this type of tail, it will be difficult for them to navigate their environment, especially in the trees.

Donovan got his first pet chameleon at the age of 7. Ever since then, he cared and raised over 10 different species of chameleons. Beside raising chameleons, he enjoys gardening and the outdoors.

This site is a participant in the Amazon Services LLC Associates Program, an affiliate advertising program designed to provide a means for sites to earn advertising fees by advertising and linking to Amazon.com. We are compensated for referring traffic and business to Amazon and other companies linked to on this site.